DUBAI EXPO STARTS NEXT MONTH - AND IT'S NOT TOO LATE TO JOIN!

These are exciting times for Dubai and the UAE. With the entire business worlds attention soon to turn to the Emirates with the delayed Expo 2020 kicking off in October (and continuing all the way through to the end of March next year) its never been a better time to be a UAE business owner

British rail companies are on track for a potential export boom thanks to the UK-Australia trade deal.

How you import from and export to Mexico.

As more economies around the world open up and companies bring employees back to the office, global expansion plans that may have been put on hold last year are now taking shape. It can be challenging to know where to start, but here are some key factors to consider when expanding your operations into new countries.

13 Possible Routes to Exporting for SMEs | the Advantages and Disadvantages

When developing your export marketing strategy, the route or routes into global markets are multiple and the route you choose will ultimately determine your success when trading overseas. With that in mind, its worth understanding the 13 common routes to exporting available to SMEs, plus the advantages and disadvantages of each channel

First off, it is useful to note that having English as your first language is both a blessing and a curse because a German and an Italian are happy to communicate in English as they are both making the effort to learn the international language of trade, English.

The down side of having English as your first language is there is no other language that we can learn that is as widely used in international trade, so we have to make the effort to communicate in multiple languages. However, the up side is that everybody who wants to trade internationally will speak English, to a greater or lesser extent, so after the initial communication, English will be the language of trade.

In this two part feature I will discuss 13 routes to market that I have split into Old School and more current 21st Century routes to export markets that werent open to SMEs prior to the digital age. This is not to say that new is better than old school because all routes to an export market are valid, provided you make a profit utilising which ever routes to market you choose. The routes we will discuss are illustrated in the graphic below.

The comments in this article are based on our own experiences of growing our own export sales from 6 per cent of sales to 67 per cent of sales, which led to one of our companies being named as National Exporter of the Year. Its this success that inspired us to develop Export Worldwide. So, there are comments from the trenches, from people who have actually created and grown B2B export sales. 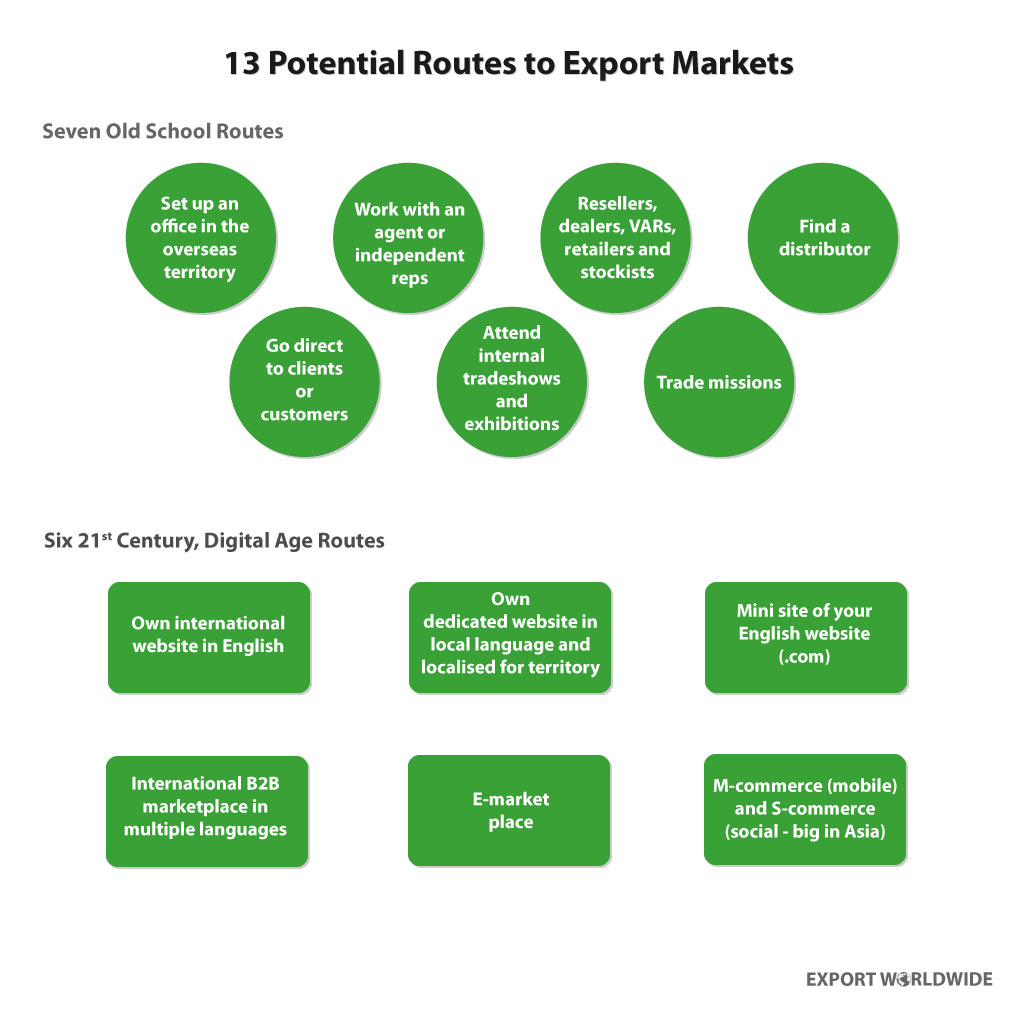 The 13 potential routes to market are