A guide to exporting to China

Moving Abroad For Work: How To Manage Your Finances

Relocating to a new country to start a business or get an exciting new role is an exhilarating process, but you need to make sure that youre fully prepared.

Secretary of State for International Trade, Anne-Marie Trevelyan, welcomes overseas investors and delegates to the Global Investment Summit in London.

Guidance for UK businesses on rules for selling services to Croatia.

The strategic partnership with the Breakthrough Energy Catalyst will mobilise £200 million of private sector funding over 10 years.

A guide to exporting to China

China  often referred to as the worlds factory  has seen unparalleled economic success in the past few decades. No other country produces and exports more goods, and China is also the second largest importer in the world.

To successfully trade with China, it is vital to be able to communicate with trade partners. This also applies to potential customers in China  over 1.3billion of them! who have requirements that local companies products often cannot meet. Chinese culture, too, needs to be considered as this can differ significantly from what westerners are used to. This is where translation and localisation come into play. 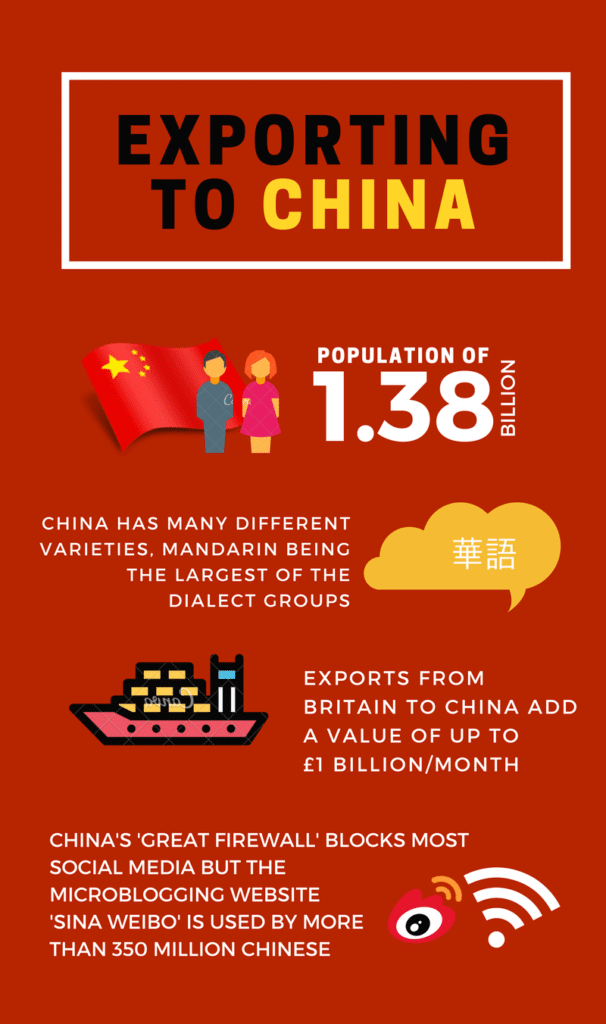 Besides Standard Chinese and Mandarin, there is a huge linguistic diversity in China that exporters need to be aware of. This means that the Chinese market should never be treated as a single market, instead the focus should be on specific areas or regions  dont just rely on one dialect and hope to reach the majority of the population. Furthermore, it should never be assumed that potential business partners speak English.

Regulations and bureaucracy can also be a big hurdle for companies wishing to export their products and services to the Chinese market. Goods that are sold in China must be supplied with a label that includes all relevant information (including content and warnings) written in Chinese.

The Great Firewall of China slows down internet traffic across the borders and blocks most social media websites; with this in mind, instead of trying to connect with your potential customers via Facebook or Twitter, you might want to try using local versions like Sina Weibo, a microblogging website that currently boasts more than 350million active users.

To this day, investors from abroad can struggle with Chinese values, some of which are based on the teachings of Confucius and Communism, and put family and the government above any kind of commercialism. Besides these values, it is also important to be aware of different behavioural structures and a complex business culture  gestures can be interpreted differently, questions can seem too personal and in Southern China, where superstition is rife, the number four should be avoided, whereas the number eight might just be the deciding factor for a partnership. It takes time to build trust and it is often quite common to go out for drinks and food with potential business partners.

Britain is one of the top 10 exporters to China  providing anything from luxury vehicles to fashion, as well as environmental solutions  with exports having almost doubled in the past decade and now totalling a staggering GBP1billion every month.

Successfully exporting to a country like China will require a lot of hard work and resources; working with a professional agency providing Chinese translation services can go a long way to helping you in this endeavour.